Recent months have seen a long overdue spotlight put on illegal immigration. Candidates for president and the media have talked about the heinous murders ofKate Steinle in San Francisco and Marilyn Pharis in Santa Maria, allegedly committed over the summer by illegal aliens who were multiple offenders and deported multiple times.

This likely would not have happened six months ago; there’s definitely a change in the air.

The dysfunctional immigration system has been called out. People are talking about how wages are suppressed by immigration — both legal and illegal.

And the big point: it’s now OK to talk about these significant issues, formerly verboten, by way of some strange alchemy that has occurred during the Republican campaign process for the presidency.

And it’s high time. Immigration and control of our borders — whether it’s the U.S.-Mexico border or any international airport across the nation — are the most important issues facing our country now.

As it’s all on the table now for discussion, I offer my six-point plan to address our immigration mess.

» Control and secure U.S. borders. In other words, do what the federal government was supposed to be doing since the passage of the Immigration Reform and Control Act of 1986.

» Ensure that every criminal illegal alien is taken into custody, jailed and/or deported using every local, county, state and federal resource available.

» Those who have broken our immigration laws, but are not “criminal aliens,” must identify themselves and where they work within a 90-day period. After the initial registration, they must re-register every six months or self deport. Those who choose not to register, but who are arrested after the 90-day grace period, should be deported with no opportunity to return to the United States for 10 years. As the process is defined, it will be determined how to address the status of these individuals.

» Implement E-Verify, currently the best way to determine that someone has a right to work in the United States.

» Reduce to zero all immigration, except for highly trained, skilled and needed individuals who bring unique talents to the United States that strengthen our nation. This system should continue for 15 years and be revisited by the federal government every five years with the states to assess needs.

» End birthright citizenship. The 14th Amendment was never intended to bestow citizenship to those who happen to be born on U.S. soil to illegal aliens or to citizens of other countries who “game the system” by coming to the United States for the sole purpose of giving birth to an “American baby.”

These six steps will facilitate “digesting” and assimilating the legal resident population, thereby helping ensure our national security and cohesive structure as a nation. 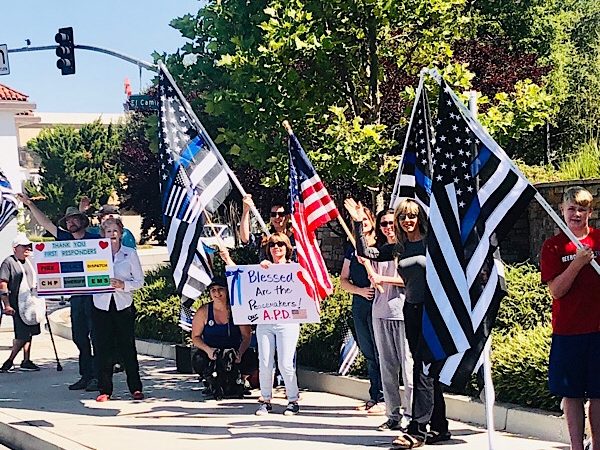 Protect Atascadero held a rally in support of the police on Saturday, June 20th, 2020 with an abundance of support from passing motorists... Read More

Welcome to the Atascadero Press. Come join in the conversation about your community.  We will be growing quickly so check back often. Read More